Submenu on the topic IMIS 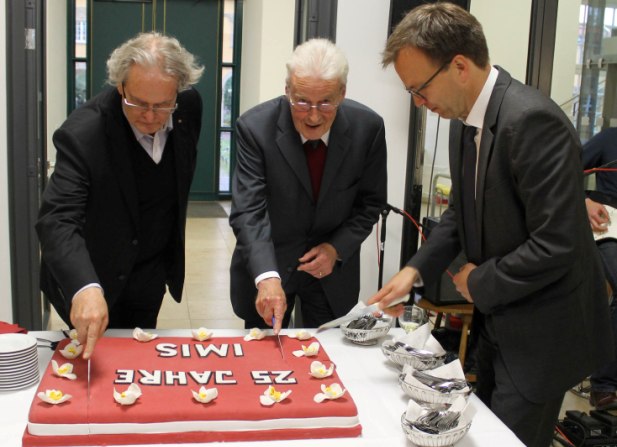 The moment of the cake-cutting by former IMIS-directors Klaus J. Bade and Hans-Joachim Wenzel as well as the acting IMIS-director Andreas Pott. photo: Anna Kaim

›Matter Of Opinion‹: IMIS in a film

On the occasion of IMIS' 25 th anniversary in 2015, students presented her perspectives on IMIS in a video:

IMIS was founded as an interdisciplinary, interfaculty research institution in 1990–91 and was officially launched in November 1991 with a ceremony in the auditorium of Osnabrück Castle. IMIS was the first regular university research institute of this kind in Germany.

The institute's genesis began at the end of the 1980s with the desire of historian Prof. Dr. Klaus J. Bade to embed historical-social migration research, which was also expanding in the Federal Republic of Germany, in an interdisciplinary context organized on a supra-regional basis. Within this context, the Working Group on Migration Research and Intercultural Studies was founded at Osnabrück University in June 1989. The group met at regular intervals for interdisciplinary collaboration meetings as well as for the organization of relevant events at the university and the preparation for founding an institute. The path from this small, working group to the institute was supported by important start-up assistance from the Stifterverband für die Deutsche Wissenschaft, the Volkswagen Foundation and the Freudenberg Foundation, all of which were acquired by Prof. Bade.

From the beginning, the institute was conceived as a supra-regional and international center of multidisciplinary interactions and interdisciplinary research. To this end, appropriate library stocks and rooms for research projects and doctoral students were to be created. The path to the first interdisciplinary institute at Osnabrück University initially required considerable persuasion of the committees and within the top tiers of the university. A decisive step towards the establishment of such an important structure was taken in 1993 in connection with Prof. Dr. Bade's negotiations with Osnabrück University and the Ministry of Science and Culture of Lower Saxony in view of his appointment to the University of Freiburg. Since then, the institute has had an office and an institute library. The IMIS library, which was initially set up in the institute building, was relocated to the main building of Osnabrück’s university library in 2019 due to lack of space. It will remain there as a closed special collection for migration research, and the working and lending conditions have thus improved considerably.

As an international meeting place for interdisciplinary research, the IMIS can offer a workplace for foreign guests with their own scholarship, who can concentrate fully on their research projects here. A significant expansion of the building’s  space in 2020 has satisfied the institute's growing need for accommodations, which has been a particular need since 2015. In January 2018, IMIS was converted into a research center at the University of Osnabrück.

From the beginning, several publication series and numerous third-party funded research projects have contributed to the intensification of the interdisciplinary work at the institute. IMIS also has an established pattern of promoting young scientists. After the completion of the interdisciplinary DFG graduate program 'Migration in Modern Europe,' in which about fifty doctoral students were trained between 1995 and 2005, the focus was on the promotion of young researchers participating in various interdisciplinary research projects and graduate programs. Following the perspectives provided by research-based learning developed within the graduate program, the master's program 'International Migration and Intercultural Relations' (IMIB) was developed in 2003–04. Since then, it has offered an interdisciplinary and research-oriented program aimed at recent college graduates from various disciplines. From 2010 to 2018, the IMIB Master's program was also involved in the Erasmus-Mundus Joint Master's Program 'International Migration and Social Cohesion' (MISOCO), which was aimed primarily at international students from non-EU countries. In 2019, the 'European Master in Migration Studies' (EuMIGS), which is run jointly by eight European universities, replaced MISOCO.

The Institute is managed by the Executive Board, which is chaired by the Executive Director of IMIS. The founding director, Prof. Dr. Klaus J. Bade (who held the office from 1991 to 1997), was succeeded as IMIS director by the social geographer Prof. Dr. Hans-Joachim Wenzel (1997 to 2002), who died in 2020. Prof. Dr. Bade again took over as director of the institute from 2002 to 2005. He was followed by the migration sociologist Prof. Dr. Michael Bommes, who served from 2005 to 2009 and then died in 2010. From 2009 to 2020, the social geographer Prof. Dr. Andreas Pott has been the Director of IMIS. He is succeeded by Prof. Dr. Helen Schwenken (sociology) who took over as IMIS director on January 1, 2021.